Edit
watch 01:54
Obi-Wan Finale - The Loop
Do you like this video?
Play Sound

You play as Houdai, a stereotypically indecisive lame guy, who has never been in a relationship. Ekoro is tasked with shooting him so that he may find romance by becoming a lot more attractive. Things go awry and he ends up being shot with too much cupid energy. This makes all of the girls in Sakurazaki Academy attracted to Houdai. To top it all off, if he doesn't tell his true feelings to the one he loves by the end of the day no one or anything will feel love for him. Now stuck in his aura of "fascination" he must shoot the girls of the Academy with his pheromone shot to get away as he finds his true love.

The main protagonist and 2nd Year student at Sakurazaki Academy.

A demon hunter and 2nd Year student at Sakurazaki Academy. She is also Houdai's childhood friend and love interest.

Shinobu's younger sister and 1st Year student at Sakurazaki Academy. Just like her sister, she is also a demon hunter, and childhood friend and love interest of Houdai.

A 3rd Year student at the Demon Academy who loves to play tricks on others.

A former apprentice angel now attending Sakurazaki Academy who lost her abilities and has to retrain as a human.

A 2nd Year student and leader of the band LOVE HEARTS who works at the Academy Store.

Gal*Gun: Double Peace features different routes that the player can choose at the end of episode 1-2 that will lead the player to different endings. The possible routes and endings are as listed below.

This route is started by choosing 'I love both' when given the choice at the end of episode 1-2. Note that this Route is available only when the player had completes both Shinobu and Maya's Route on good end or better.

This route is started by choosing 'I have no idea' when given the choice at the end of episode 1-2. Note that this route is available only when the player had cleared either Shinobu or Maya's route on good end or better. From here on, the route diverge again to either Ekoro or Kurona's Route. An additional route is unlocked when the player has acquired two half of an angle halo by completing all available routes except for Unseen Destiny with True end. This will lead to another divergence from Kurona Route to Patako Route.

This route is started by choosing 'Ekoro is right, let's help Kurona' at the end of episode 4-2

This route is started by choosing 'Help me, Ekoro!' at the end of episode 6-2, assuming the player had acquired both half of an angle halo

This route is started when the player has donated to the L0VEHEARTS five (5) times from within the Academy Store.

Double Peace retains many of the rail shooter elements and unique mechanics from the original Gal*Gun, such as the weak point and Ecstasy Shot system. However, some gameplay additions and quality of life changes were introduced. One of the biggest changes is that hitting a target outside of their weakspot no longer breaks an Ecstasy Shot combo by itself: it only breaks if the target isn't defeated via an Ecstasy Shot. Double Peace also introduces girls possessed by Mini Kuronas, which enhance the durability of the targets significantly and negate weakspots, thus requiring the player to target the Mini Kuronas latched on to the girls before going for Ecstasy Shots. Both of these new mechanics are carried over to future titles.

Unique to Double Peace specifically is the charge shot, which, when fired, can stun targets it hits, as well as clearing Mini Kuronas and Mr. Happinesses in one shot. The Doki Doki Bomb from the previous title has been changed to the Doki Doki Field, which can be used to specifically target up to three girls depending on the amount of Doki Doki meter saved up. The camera automatically moves around, which only requires the player to try to fill up each girl's gauge before time runs out. If successful, the resulting screen clear adds to your Ecstasy streak. Otherwise, the screen clear will still result but the combo will be broken. Unlike the previous game, a successful Doki Doki Mode will hit all targets in the area, rather than just the ones visible to the player.

Another change from the original is the introduction of a stage select for most chapters. In addition to giving players more choice for their playthrough of the game, this ties into the new request system. The request system involves receiving minor side objectives for specific stages from the other students. Often, these require finding a certain object in a stage or on a girl, but sometimes there are other objectives, such as finding certain measurements or finding a ghost girl. Completion of these requests rewards Angel Feathers, a currency that can be used to purchase items from the game's shop in between stages.

Aoi's shop allows the player to purchase upgrades that can improve gameplay-related stats (such as health or shot power), adjust the player's social stats, and other items. These items are purchased with Angel Feathers, which are earned from completing stages, minigames, and requests. 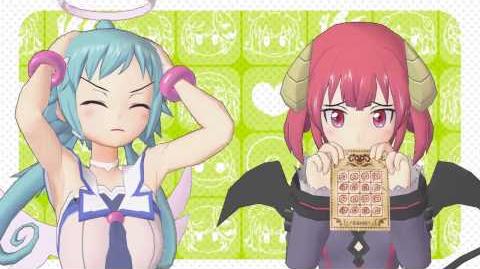