Edit
watch 01:40
The Sandman Will Keep You Awake - The Loop
Do you like this video?
Play Sound

Gal*Gun: Double Peace
Gal*Gun 2
Kurona is a mischievous demon girl who is a third year Junior student at the Demon Academy, and is an antagonist in Gal*Gun: Double Peace and Gal*Gun 2. She causes trouble in the human world in order to pass her exams. Kurona tries to act evil and heartless, but she is actually quite cowardly and a bit of an air-head.

Although it is yet to be directly confirmed, it is very likely she is the antagonist of Grim Guardians: Demon Purge.

Kurona has dark red short hair, red eyes, yellow curved horns, and a black pointed tail and wings. She wears a frilled black collar, along with a pink-eyed skull necklace on her neck. She sports a black, frilly summer junior Demon Academy uniform, with a long black socks, and red boots. Kurona is often seen with her signature Demon Spear, which is a trident with gold points attached to a red staff.

Kurona is capable of flight, and wields her signature demon spear, which causes those stabbed by it to bully their love interest, or bends the victim to Kurona's will. She is also capable of summoning powerful demons that follow her bidding, such as Mr. Veggie Demon. In Gal Gun 2, she can also summon mini demon versions of herself, which can apply the effects of the demon spear to anyone they attach to. She can also fire black matter on her staff.

Due to her preparation to ambush Houdai with her Demon Spear, Kurona's presence is indirectly responsible for Ekoro's rushed and subsequently backfired attempt to increase Houdai's chances at love. Later, she is chased by the Kamizono sisters in front of the Academy, and escapes due to Houdai bumping into them.

In all routes, Kurona is trying to pass her make-up exam from Demon Academy, which requires filling up a stamp card. Whenever she causes mischief or pranks, the stamp card fills up with aptly named "Mischief Makers", and she will not give up until her stamp card is complete. Her most common trick is demonic possession via her Demon Spear, which corrupts the love of the affected into wanting to punish the target of their affection. Kurona's subsequent role in the story is route dependent.

In Shinobu's route, she causes plenty of trouble for Shinobu, who is relentless in pursuing her. In the gym closet, she escapes Shinobu's attempt to ambush her, which results in a rather embarrassing predicament for the demon hunter. Later, she ambushes Shinobu in the school's changing room with her demon spear. Because she was not wearing her enchanted bells, Shinobu falls under her influence and Kurona manages to escape, leaving Houdai to deal with the corrupted Shinobu. Her final encounter with Shinobu occurs in the caves under the school, where the demon hunter is captured by Mr. Demon Veggie. Once defeated, Kurona's arrogant facade breaks and she begs for forgiveness, saying that she only performed her bad deeds to pass her exams. She is banished back to hell by Shinobu in retaliation to the mischief and humiliation she has caused.

In Maya's route, despite humiliating Maya with her antics, Maya helps Kurona fill out her stamp sheet by baiting Houdai into a booby trap. This trap resulted in a series of pranks, which was enough to complete the stamp sheet. Kurona and Maya form an unlikely friendship, and promised to only cause "a little trouble" for the demon hunter the next time they met.

When the Kamizono sisters follow the Kurona into the school's underground caves, they are captured by Mr. Demon Veggie. Following Mr. Demon Veggie's defeat, Kurona begs for forgiveness, but is banished to hell by Shinobu and Maya.

In both the Angel and Demon routes, it is revealed that Kurona had already fulfilled the stamp requirement, and was looking on the wrong side of the stamp sheet the entire time. She had been causing so much mischief that the stamps started to appear on the other side. Causing too much mischief would cause her to fail the exam, so she needs to perform good deeds to remove the extra stamps. Fortunately, due to the opposite nature of the demon spear, stabbing Houdai with the spear can neutralize the effects of his overwhelming popularity, which would qualify as a good deed.

In the Angel route specifically, Ekoro falls ill due to being an accomplice to Kurona's mischief. She accompanies Houdai and Patako to the roof to help purify Ekoro. After the Ekoro boss fight, depending on the ending, she either stabs Houdai with the demon spear to neutralize the effect, or chooses not to due to feeling forgotten and ignored.

For the Demon route, Kurona realizes that she has lost her spear, and separates from Ekoro and Houdai to search for it. When the duo find the spear in the Lost and Found, Aoi Uno notes that the shrine maiden who retrieved the spear felt a negative aura emanating from it. After being given the spear, the negative aura from the spear, caused by performing an excess of bad deeds, corrupts Kurona. The corruption creates a bloodlust against humans, and Houdai and Ekoro defeat her before she potentially goes on a rampage. On the true ending, Kurona returns to normal, and develops feelings for Houdai even after she negates the popularity aura. After Houdai shows some reservation to accepting her feelings, she promises to one day return to him as a demon so beautiful that he would fall in love with her.

If Houdai manages to find a compatible love interest, Kurona will have captured his true love within Mr. Demon Balloon on the roof. Once defeated, she retreats. However, if Houdai is incompatible with all potential love interests, she writes a fake love letter to him as a prank. She waits for him on the roof, where she reveals the deception and leaves Houdai to despair over his lost chance at love.

In Gal*Gun 2, Kurona uses her Mini-Kuronas to possess the female students in the school. Her role in the story depends on which route(s) and missions the player chooses.

Kurona casually flies by the school window while the protagonist is in a conversation with Nanako, which prompts him to run outside the school, but she has already disappeared by the time he gets there. When Nanako has seemingly transformed into a demon, Risu and the protagonist ask if she's heard of such a thing occurring. Kurona claims that she has, and that by undergoing a special ritual the transformation could be undone. This ritual turns out to be nothing more than a cheap prank by Kurona. Her personal theory about Nanako's condition is that she's likely a demon who has failed her exams, and thus had her memory wiped and was transformed into a human.

A 3rd year trainee at the Demon Academy. Kurona is overflowing with unearned confidence that crumbles quickly when she's on the receiving end. She has a habit of sprinkling the word "HELL" into her speech. Kurona is a classic troublemaker who loves to play tricks and hates studying. She has been sent to the human realm to complete a practical exam.

Also looking to pass her final exams is Kurona, a mischevious demon sent to make Houdai's mission as difficult as possible. In order to pass her demon training exam she needs to collect "Mischief Makers" stamps or risk flunking entirely. To help her, she's converted swarms of school girls to dish out harsh punishments on Houdai.

A third year student at the Demon Academy. She's beautiful, but a bit of a weakling. She over compensates by playing tricks on people - but she gets carried away too easily.

3rd year student of a Demon Junior High school. Often gets carried away, but she's very wimpy. Bad at studying. Likes doing mischief. She will make her name famous as "The Bewitching Courtesan", in a not far future.

A third-year student at the Demon Academy.

She's always been treated as the class dunce, but thanks to her recent supplementary lessons, she's proven herself to be among Hell's most powerful demons.

Basically, she's got talent. Lot's of it.

But she's still kind of a wimp, and the power is getting to her head.

Kurona appears as part of the Rivals DLC Character Set in Mighty Gunvolt Burst aka Gal*Gunvolt Burst. Her unique abilities include a super gauge that allows her to pierce shields when full, hovering for a limited time, and pogo bouncing off of enemies using her Demon Spear. Addtionally, she has slightly faster movement speed compared to the other characters. The plot of her campaign involves her finding a student's game, and decides to beat the save file before the owner as a prank.

Kurona makes an appearance alongside Risu, Nanako and Chiru in Venus Eleven Vivid! as part of a collaboration. [1]

Kurona makes an appearance as a DLC boss in Gunvolt Chronicles: Luminous Avenger iX 2. This DLC released on March 24th, 2022 and at the cost of $4 USD (400 yen). She encounters series protagonist Copen after getting lost on her way to Sakurazaki Academy, and decides to fight him as a prank. The reward for her boss fight is the "Dark Power" ability, which transforms Lola into her Darkness Trigger mode and sets the BGM to "Beyond Probability" once 1000 Kudos has been reached. 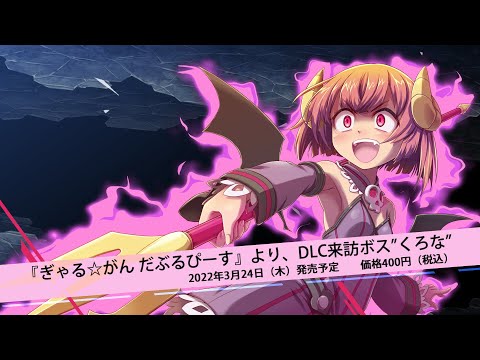 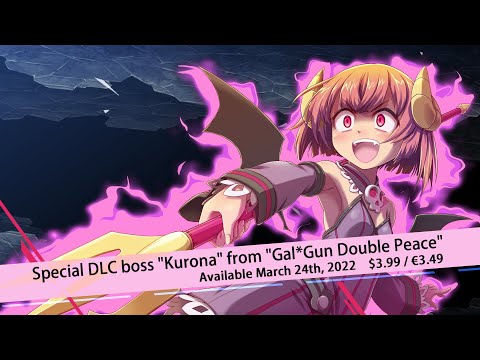