Edit
watch 01:40
The Sandman Will Keep You Awake - The Loop
Do you like this video?
Play Sound

Additionally, she and Maya star in Grim Guardians: Demon Purge, as a demon hunting duo fighting through a mysterious castle that has appeared at Sakurazaki Academy.

In the Gal*Gun games, Shinobu has blue eyes and long ,black, flowing hair that drapes down to her waist. She wears a red hair band and two hair accessories, each with two silver bells and red ribbons, that house the guardian that protects her from the powers of angels and demons. As a 2nd year student of Sakurazaki Academy, she is seen wearing the 2nd year uniform, which features blue elements, with a frilled skirt. For her legwear, she wears black leggings and black shoes.

As a demon hunter, Shinobu uses a MAC-10 uzi that seems to fire bullets that either blinds vision or deals damage. She can also be seen wielding a M202 FLASH rocket launcher.

In Grim Guardian, she specializes in long-range combat, using her uzi to rapidly fire bullets at foes. She also uses other long-range subweapons, such as throwing daggers and grenades.

Shinobu Kamizono is the older sister of the Kamizono sisters, and is seemingly the spiritually weaker one of the demon hunting duo. She and Maya used to be childhood friends with Houdai, but time has seemingly increased the distance between them. One fateful day, however, her occupation as a demon hunter is exposed after bumping into him while pursuing Kurona. Upon realizing Houdai was able to see the demon girl, she briefly opens up and wishes for him to become a demon hunter. Noticing his hesitation to accept the offer, she decides to cut off the conversation and resume hunting Kurona. Her role in the story after this point is dependent on the route the player chooses.

When Houdai decides to follow her, Shinobu continues to try to avoid talking to him. Seeing that the conversation seemed to be going nowhere, Ekoro tries to use the Doki Doki Field to strengthen the bond between the two. However, the Pheromone Shot's power is blocked by Shinobu's Guardian, a manifestation of her will with a strong power of rejection. Noticing Houdai's strange behavior, she concludes that a demon's influence was to blame for his initial hesitation, and strengthens her resolve to hunt down Kurona. She then leaves Houdai behind once again to resume her pursuit.

While Shinobu is preparing to ambush Kurona, Houdai finds her and offers to help. When he observes that Kurona looks just like a normal girl, Shinobu claims that demons have long used their beauty to deceive the foolish. Houdai's response results in an outburst from her, which alerts Kurona and causes her to flee through the window. Shinobu herself gets stuck in the window in attempt to give chase.

After being freed by Houdai (or Maya), Shinobu is embarrassed by the incident and continues to hunt Kurona on her own. She then investigates the rumors of a "panty thief" in the girl's changing room. While changing clothes herself, she removed her enchanted bell charm, leaving her vulnerable to demonic possession from Kurona's demon spear. This possession causes her to be loyal to Kurona and display a more sadistic personality.

Once the possession was dispelled by Houdai and Ekoro, she swears to hunt Kurona down. She also explains that her bell charm is the Talisman Bell, which enhances her abilities and powers as a demon hunter. Without it, her power is so weak that she can't see demons, whereas Maya is capable of defeating demons without the need of such items. This brings her feelings of inadequacy to the surface, and she decides it's best for her to sort out these feelings on her own.

After following Kurona to the school's underground cave, she gets caught and swallowed by Mr. Demon Veggie. When Houdai defeats the monster and frees her, Shinobu uses a talisman to banish Kurona back to Hell despite the demon girl's pleas for forgiveness. However, despite being thankful for Houdai's assistance, having to count on him so much and feeling that he might surpass her as a demon hunter further increases her feelings of inadequacy.

Shinobu is followed by Houdai in a classroom, where she explains that usually, Maya is the one who fights in the frontlines while she lends support. This is because Maya is the strongest demon hunter the Kamizono family has had in generations, and thus that was why she had trained with the head family for three years. Shinobu meanwhile had stayed behind, leading her to believe that she just comes short compared to her sister. However, out of her desire to try to act as a proper older sister for Maya and to prove herself, she specifically requested to the head family that she and Maya switched roles on this day. However, her failure, along with her unwilling jealousy of Maya and Houdai's abilities, has made her feel miserable. Her Heart Guardian grows stronger, which repels Houdai and Ekoro's attempt to use the Doki Doki Field. She wants to be left alone, but before she leaves, she requests for Houdai to use his power to aid Maya.

In the Angel/Demon route, the only appearance Shinobu makes is when she is possessed by Kurona, and is thus forced to fight Houdai.

A prideful and slightly arrogant young woman. She attends Sakurazaki Academy alongside Houdai as a fellow 2nd year. Thanks to her family's history of demon hunting, she has an almost-unhealthy obsession with the angels who fight against the demons. Shinobu's overwhelming confidence makes others think of her as reliable and talented, but in reality her grades are rather poor. She was once close childhood friends with Houdai, but after her little sister Maya was sent to live apart from her family, she started to act distant towards him. Presently the two are quite estranged.

Shinobu, along with her sister Maya, are demon hunters that were childhood friends with Houdai. After Houdai is pumped full of angelic power the group reunite to hunt down Kurona. Despite being the eldest, Shinobu is helpless at demon slaying and beneath her cold exterior lies a hidden lack of confidence in true Tsundere fashion.

Complete Shinobu's route with an S rank or higher.

Complete the following events to unlock her three clothing variants:

Shinobu route, "Shinobu in the Window"

She's made herself out to be a serious, class-president type, but her facade has been slowly wearing away, revealing that she's actually kind of a mess.

She likes to read young adult novels in her spare time, and tries to hide it from everyone.

Shinobu Kamizono: What should I do...? This is why I usually read my books at home.

Shinobu Kamizono: But I just bought a new one and was reading it in the cafeteria because I just couldn't wait...

Houdai Kudoki: I didn't know that you like books. I'm a little surprised. What kind of books do you like?

Shinobu Kamizono: This one's story is about an angel who lost her wings... Ya know, a love story!

Houdai Kudoki: I see. Well, you've always loved angels since you were a kid, haven't you? I will help you find it. What is it called?

Shinobu Kamizono: It's called "My Girlfriend is an Angel".

Shinobu Kamizono: You found it! Thank you.

Houdai Kudoki: Is this the book you were looking for?

Houdai Kudoki: Sorry! You said the story is about an angel so I thought this was the one. By the way, do you read those trashy romance novels too?

Shinobu Kamizono: I... wait... What?? No! I wouldn't do anything so disgusting and immoral, you idiot!

Argh, my back hurts!

Shinobu Kamizono: Ugh... my back really hurts from being stuck in that window.

Shinobu Kamizono: No, I'm not okay! I thought I was gonna die from the sheer embarrassment of it all!

Houdai Kudoki: You aren't so young anymore, so you gotta be more careful!

Shinobu Kamizono: What?! I'm not some freakin' old lady over here! You need to be more choosy with your words!

Houdai Kudoki: My bad, I'm just worried about you. I'll go to the infirmary and get a heat-wrap for your back from Kurashiki-sensei.

Shinobu Kamizono: Thank you... I'm sorry if I was cross with you...

Houdai Kudoki: That's okay... let me put the wrap on for you. Just lift your shirt and turn around...

Shinobu Kamizono: Mm, yeah... Hey wait! I can do it myself! You idiot! You're shameless!

Shinobu Kamizono: I can't believe I behaved so inappropriately with Houdai. It's all that demon girl's fault...

Shinobu Kamizono: But then, the real me might have wanted to do that with him anyway... Maybe I really am the domineering type after all...

Maya Kamizono: If you're that worried about it, why not ask Ho-nii to do it again?

Shinobu Kamizono: Maya! What are you talking about?! I can't do that!

Maya Kamizono: You need to show off your legs. Rough him up with your sexy adult legs.

Shinobu Kamizono: Really? You... think so? So basically, I need to rock it like Kuribayashi-sensei, right?

Shinobu Kamizono: What's with the shoes?

Houdai Kudoki: I heard you were having a bad time, so I wanted to do something nice for you...

Shinobu Kamizono: You didn't have to do that...

Houdai Kudoki: No really, it's okay. I wanted to! Please wear them! Your legs are amaz- er... I mean... I think they'll really suit you!

Shinobu Kamizono: Are you... letching over me? Look at you, all hot and bothered. How about I wear those heels and trample your nether regions until you cry for mercy?

Shinobu Kamizono: Oh come ooon! My uniform all so sticky, smelly, and totally ripped up...

Shinobu Kamizono: I can't go to class like this!

Maya Kamizono: But Shinobu-chan, you have to go to class.

Maya Kamizono: Being a demon hunter is important, but so is studying.

Shinobu Kamizono: Hmm, there's a girl in my class who's kinda like the group mom. I bet she has a sewing kit. I wonder where she went...

Maya Kamizono: Your next lesson is PE at the pool, isn't it? I think she's there.

Maya Kamizono: Now you can fix it.

Shinobu Kamizono: ...But actually, I'm no good at sewing... 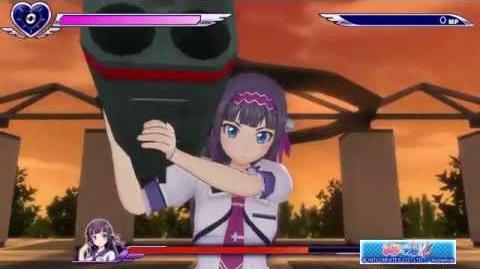